There is no doubt when we say that soldiers are probably the biggest assets of any country. They are the ones who guard the country and safeguard the citizens from attacks of other countries.

“The Life of a Soldier” Complete Essay for Class 10 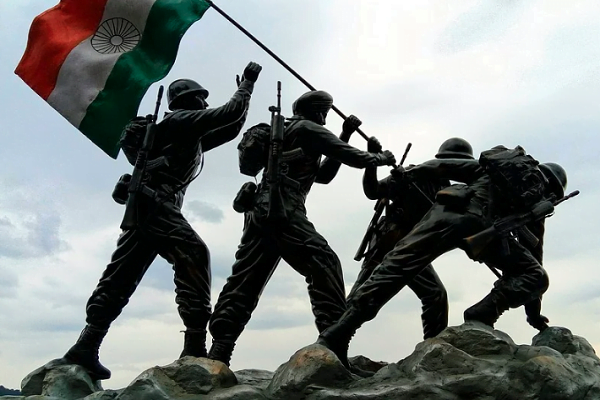 Soldiers are selfless as they learn to sacrifice their life for the need of their country. They always put the national interest above their personal interest. It can’t be denied that the job of a soldier is undoubtedly the toughest one in the world.

They are always expected to fulfill all sorts of challenging duties and hence they need to have exceptional qualities that make them a strong and sturdy soldier.

As they have to live separate from their family, their lives get even tougher. Despite all these mental hardships, they fulfill their national duties from the core of their heart.

Countries and their soldiers

Every country has soldiers who constantly keep fighting for their country so that they could protect them from the enemies. Few of the nations that boast of having the largest defence forces are United States of America, China, India, France, United Kingdom and Saudi Arabia.

All the countries of the world bound to have their own defence systems where the soldiers could protect them not just from the enemies of other countries but also rescue them from internal conflicts and natural calamities.

Every country is proud of the army, air force and navy that they own but we should actually thank the foot soldiers who are always standing at the border to protect the country’s citizens. Among the people who are honored and respected, soldiers are the ones and they rightfully earn this immense respect from the people of the country.

Keeping in mind the amount of sacrifice that they do in their personal lives to make sure their country is kept sound and safe, it won’t be wrong to call them the lifeline of the country.

During the smallest conflict or unrest that happens in the country, you can be sure that you have their back. If you’ve been asked to write an essay on the life of soldiers, here are few points to cover.

Soldiers and their duties

Why do soldiers hold so much importance in our lives? This is because they perform several duties for their country that would be rather impossible for anyone else to perform. Here are few roles performed by them.

Majority of the navy and army soldiers are always present at the country’s borders as this is probably the most traditional defence strategies used by the nations since time immemorial.

The soldiers work hard to keep away all sorts of bad elements from entering the border of our country so that the remaining society can be kept protected and safeguarded.

Thanks to the Indian soldiers who are guarding the country right at the border of Pakistan that lies in the west and China border that lies on the east. It is because of them that the occurence of terrorist activities are significantly low in India.

When they defend the country at the borders, this doesn’t only include barring infiltration but also protecting the land from cruel takeovers. The soldiers rightfully protect the land as per international laws.

During natural disasters like floods, earthquakes and volcanic eruptions, the country takes resort to their soldiers. We have already seen several instances like the soldiers saving the hundreds of stranded men during the earthquake in Uttarakhand and also during the Amphan cyclone that occurred in Bengal.

So, the soldiers not just rescue people of their nation but also assist during rescue missions and national emergencies.

The airforce soldiers and pilots also participate in airlift mission from different conflict zones. The navy also safeguards the economic interest of the country and let them maintain smooth logistics through the sea.

In order to be able to perform all the above listed duties, the soldiers have to sacrifice several things in their lives.

Years after years, they stay away from their families without even being certain about whether or not they’ll ever get back alive. Apart from physical abilities, they also need immense mental strength to become a true soldier.

Soldiers and the challenges they face

Life is never a bed of roses for the soldiers. Their lives are full of challenges and hardships that no ordinary person can ever survive. Here are the challenges they face:

Therefore, we can well understand how challenging the life of a soldier is. Soldiers are constantly subject to the toughest impediments and obstacles in life and hence they learn how to succeed despite all such hardships.

There are 1.4 million soldiers in the Indian Army and India has the second largest army after China. It was Subhash Chandra Bose that first led the Indian National Army (INA) and now we have a defence team to boast of.