If you’ve been asked to write an essay on the uses of computer, you’ve clicked on the right post. Here we’re going to discuss the ways in which a computer has changed the lives of mankind.

Essay On Computer for School Students 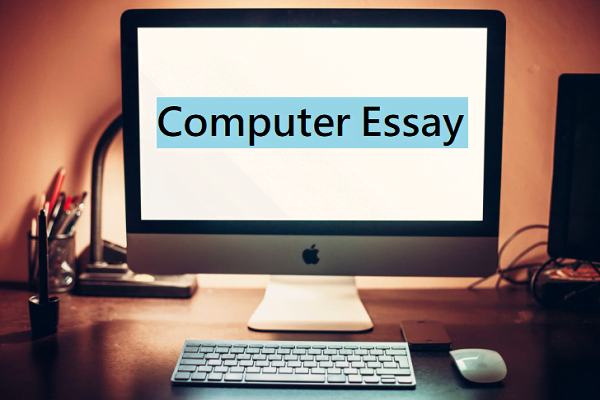 We can’t deny the fact that a modern-day computer has become an inseparable part of our lives. Since the last decade, the usage of computers has increased manifold. Presently, a computer is seen in every government and private office.

How did computers evolve?

If you have to trace the origin of computers, it can get pretty tough. However, as per some experts, computers have existed since the World War II. During that era, computers were mainly kept for maintaining and storing data.

They were only used for government purposes and never for personal reasons. Initially, the computer was large and a huge machine, unlike the ones that we see now.

What is a computer?

A computer is an electric device which is leveraged by humans to perform different sorts of calculations at a very fast speed. This machine plays the role of a data processing tool and is able to store loads of data.

The data could be in the form of pictures, text, voice notes, photographs and any other kind of information that humans need during their daily operations. We have reached a stage where we can’t imagine our life without computers.

In fact, we presently live in an era of computers and related techniques that is called Information Technology (IT). It is through computers that we can learn various new techniques like graphic designing, study materials, games and different other educational institutions.

Computers also assist people studying in colleges to prepare accurate reports. They are of extreme use to office executives in software development, accounts management, manufacturing and sales invoicing.

Computers are also used in libraries for effective management of operations. They can operate different equipment and factories. Computers also control nuclear weapons and satellites.

How does a computer work?

There is a three-step cycle following which a computer runs – input, process and output. No matter what task a computer is asked to do, it will always follow this 3-step process.

For a layman, this 3-step process can be described in this way. The data or information that we enter into the computer is the input, the job of the CPU is to process the data and the outcome which the computer gives is called output.

Components of a computer and its types

A simple computer comprises of monitor, CPU, keyboard and a mouse. You can attach hundreds of other computer parts to it. Such parts may include laser pen, printer, scanner, pen-drive and many more.

Nowadays, with the invention of high-end smartphones, these are also similar and equivalent to computers. There’s nothing that a computer can do and that a smartphone can’t.

A supercomputer is that which performs tasks at the highest operational rate that a computer has. A mainframe is the most powerful and the largest type of computer. A microcomputer is used in homes, schools, banks and other small businesses.

How is computer used in different fields?

With the increase in usage of computer, it has become a necessity for every industry to use computers for different kinds of operations. Thanks to the computers that sorting out and working things have become easier. Here are few of the most vital fields where a computer is used for day-to-day operation.

The medical professionals use computers for running tests, diagnosing diseases and also for finding out the cure for fatal diseases. They can successfully find out solutions and medicines for deadly diseases because of computers.

Regardless of whether it is space research or scientific research or some sort of social research, computers can help you in more than one ways. It is for computers that we can keep a tab on our surroundings, environment, society and space. Scientists have been able to explore galaxies with the help of computers. They even helped locate vital resources from the earth.

For any nation, the defence of a country is the most vital for the security and safety of people. The computers that are used in the defense industry can assist the security agencies of the country to locate a possible threat that can harm the citizens of the nation. Hence the entire defence industry uses computers for maintaining a strict surveillance on the nation’s enemy.

How is a computer useful for Students and Children

The invention of technology has been of huge benefit to students. It is used to store notes, data, study materials and thesis papers for educational purposes.

Parents, these days, buy desktops or laptops for their children so that they could easily do their homework. Students usually use computers for storing large sized data like study materials, information, photos, projects, audio, images and video assignments.

Computers are also used for solving complex mathematical sums and other calculations. Thanks to them that there is less of paperwork in colleges and schools. As it has large storage and memory data, it can easily save large files.

Computer education is vital for all students as they can gradually learn to work in an effective manner. Currently, all jobs demand the employee to have computer operating skills. Hence, artificial intelligence of computers is currently leveraged at all walks of life.

Therefore, this electronic machine or device makes our life easier and seamless. Without them, life will come to a stop. So, while you write an essay on this topic, you have to include all the points mentioned above to make it appealing.