A lion is the king of the forest and is also a national animal. It has a strong body and is one of the big animals found in the forest.

Lines On Lion In English for Kids and Students 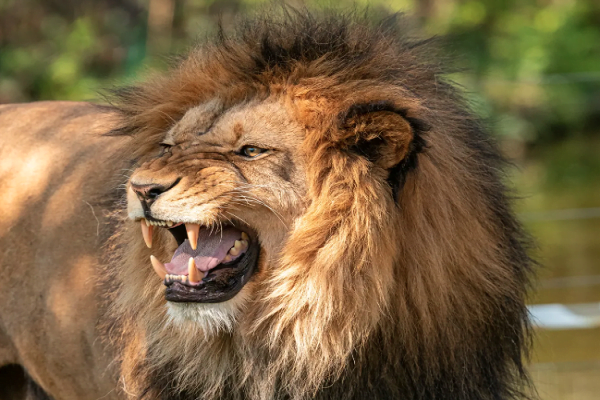 No matter which standard you study in, whether class 1 or 2 or anywhere till class 5, you may be given the topic of a lion to write as an essay.

If you’re not aware of the things to include in your essay for school, we’re here to help you out. Once you read our essay, you will have a proper idea of how to write such short essays. Read on.

The name of a lion in Swahili, an African language is ‘Simba’. When they’re kept in the wilderness, they can live up to 12-14 years. Lions have two immensely sharp eyes that never fail to spot a potential prey even during night.

Lions are great hunters and they have been made that way so that they can find their own food, which is mostly flesh and meat. Lions sleep during daytime and they move out of their caves at night when they’re out for searching food.

The lion can have a name but the lioness usually doesn’t have any name. It can kill any other animal that comes into its proximity when it feels hungry. One of its famous features is its roar.

When it roars loudly, other animals usually run away in fear. Lions run extremely fast but it is not among the greedy animals. Noone dares to stand in front of a lion due to its majestic demeanour. Lions are also too fond of sleeping.

It is rather sad to note that the total number of African lions in the wilderness is gradually declining at an alarming rate. In fact, the rate is so alarming that they’re almost at the verge of extinction. Since the past decade, their numbers have reduced by at least 30%.

The biggest threat to African lions of the wilderness is that they are either being killed or hunted for different organizations that use their body parts.

Where can you find lions?

Lions happen to be the national animal of Bulgaria, Albania, Belgium, Ethiopia, England, Luxembourg, Singapore and Netherlands. They can reach their running speed of up to 81 km/hr (50 mph) but they can run through a short stretch only because they lack stamina.

There was a time when lions basically lived in Africa, Europe, North America, Middle-East and Northern India. However, at present, they mainly live in Africa apart from a pride of 300 Asiatic lions that live in the Gir forest of India, Sunderbans delta of Bengal and in Gujarat.

Lions and their behavior

Belonging to the cat species, they’re probably the most social animals. A pride of lion usually comprise of 2 males, 7 females and any number of cubs. The lionesses are together with their cousins and sisters with whom they must have been living since their birth.

The body of a lion has a light or dark brown plain coat without any spot while there are spotted lions found in places like Southern Africa. However, they’re not the actual Albinos.

At the age of 5 years, a male lion reaches its sexual maturity stage and a lioness reaches its stage of sexuality at the age of 4 years. A lioness within a pride steps into the breeding season together and they even give birth to their cubs at the same time as well. Hence, the lionesses can share their maternal and nursing duties with each other.

A lioness is pregnant for 98 and 105 days till it gives birth to an average of 3 cubs. Unfortunately, all the cubs that are born don’t survive because they can’t succumb to the harsh climate and habitat conditions.

The cubs are usually born blind and they move too slowly. The weight of these cubs is usually less than 5 pounds.

What do lions eat?

Lions keep hunting for food every alternate day. They usually feed from the preys they kill and then they rest until they again go out for hunting. This pattern is followed in zoos where the lions have 2 ‘starve’ days in a week. Lions tend to kill medium-sized animals like deer, zebra and wildebeest.

They even eat animals that are killed by others like hyenas. Lions are fed on chunks of meat. They are also given whole dead animals.

Therefore, if you’re someone who has been given to write an essay on a lion, you should include all the above mentioned points.

Give them in different parts just as is given in this article and make sure your essay is easy-to-read by your teachers. Write in simple English and if you have new points to include, do share with us.