Peacock is a huge bird that is of utmost importance in countries like India. It is the national bird of India. The peacock is loved by most due to its vibrant colors and its habit of dancing when they see clouds in the sky. 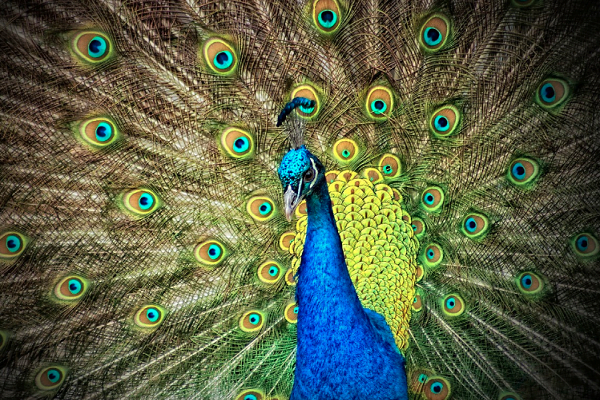 Peacocks are famous for their immaculate beauty in the world of birds. They are blessed with hypnotic appearance. It is a pleasurable experience to see a peacock dance during the Monsoon season when they expect rainfall.

The beautiful colors that you find in the wings of the peacock are eye-soothing. It is also of high significance due to its place and importance in different traditions of India.

Due to all these, it has been chosen as the National Bird of India. Now, if you’ve been given to write an essay on peacock, here are the points you may cover.

Peacocks are the names given to the male species and they are the ones who have been blessed with this eye-catching appearance. The recognition that peacocks have earned in India and in other countries is all because of the way it looks.

The length of a peacock, from their beak to the end of their train is 195-225 cm. They weigh 5 kg in average. The neck, head and breast portion of the peacock contains lustrous and shimmering blue color. Around their eyes, they have patches of white as well.

At the top portion of a peacock’s head lies a crest of feathers. If you have to choose the most remarkable feature of a peacock, you can’t choose anything apart from its beautiful tail.

The tail is so big that it is named a ‘train’. This train is developed post 4 years of hatching. The display features start growing from the back portion of the bird. The feathers are also a vital part of the huge upper tail. The feathers of the train don’t have barbs to hold them and hence they’re fitted loosely.

How is the peacock so beautiful to the eye? Well, the iridescent colors of the peacock are due to the microstructures that are found within them. They are also called optical phenomena.

The feathers of the train end in an oval cluster which appears to be extremely beautiful to the eye. If you see the wings at the back portion of the peacock, you’ll find them to be greyish brown in color. These wings are not only dull but short as well.

Peacock – How does it behave?

As already mentioned above, a peacock is extremely popular for its striking display of features. When they spread their beautiful train and again quiver it back to position, they do it for attracting the peahens for courtship. The eyespots in a male have a link to deciding its success in mating.

Peacocks are omnivorous as they usually eat insects, seeds, fruits and sometimes small mammals. They reside in small groups which generally has 1 male along with 3-5 females.

And They climb up the branches of a tall tree and perch themselves on the upper branches. They do this in order to keep predators at bay. When in danger, they prefer running fast or quickly taking a flight. However, they’re not too fast on foot.

Feathery facts on Peacocks you should know

Peacocks have long fascinated human observers who are yet to learn their secrets. For instance, the British Journal of Animal Behavior says that when peacocks fan its train for attracting the ladies, they emit a low-frequency sound which is not audible to the humans.

They have the ability to change this sound by shaking various parts of the feathers. Check out few other impressing and interesting facts on a peacock:

The collective term that is used for a group of these birds is ‘peafowl’. The male species are called peacocks and the females are called peahens. On the other hand, the babies are named ‘peachicks’.

A group of peafowl is either called a bevy or ‘ostentation or ‘muster’ or even a ‘party’ of peafowl. By knowing these words, it is easier to describe them properly.

If you thought that the male peachicks have their feathers since their birth, you’re wrong. They don’t start growing them unless they reach the age of 3. As the peachicks look exactly similar to their mother, it is hard to determine their sex while they’re born. Once they are of 6months age, the males start changing color.

This is one of the luckiest facts about peacocks that they don’t have to be killed in order to gather their peacocks.

Peacocks shed the feathers of their train every year post mating season. Hence people can gather the feathers and sell them without causing any kind of harm to the birds. The average time through which they live is around 15-20 years.

The tail feathers of a peacock can reach till 6 feet long and it accounts for 60% of the length of the body. In spite of the odd proportions, the bird flies pretty fine but not too far.

Due to selective breeding, it is rather common for peafowl to eliminate the iridescent trend for white feathers. This can be done through leucism and it is due to a genetic mutation which causes their pigment to lose.

They can be often mistaken for being albino but rather than getting red eyes, they can retain their usual eye color.

To sum up, it can be said that the peacock is a bird that has a different mesmerizing charm. It is a fascinating bird which has been a matter of pride for the Indians since centuries. It is a bird of exquisite and unique beauty. Peacocks are the best representations of the fauna of India.